Spotlight on Lydia Johnson, one of the few female climbers on the Cascades climbing team 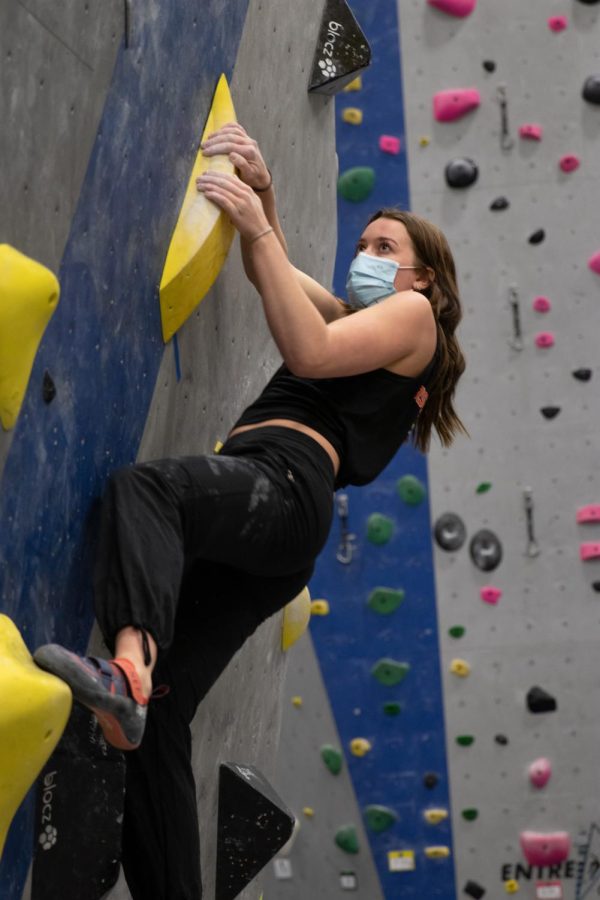 OSU-Cascades student and climbing team member Lydia Johnson climbing during a team practice Tuesday, Feb. 8, at the Bend Rock Gym. This group is one of the most active teams at the OSU-Cascades campus; participating in climbing competitions and weekly practices.

As one of only two female rock climbers on the Oregon State University-Cascades climbing team, Lydia Johnson keeps team spirits high and works to push herself to think creatively in order to compete with her male counterparts.

Johnson transferred to OSU-Cascades this past fall after receiving her associate’s degree from Mt. Hood Community College. She is now a third-year student majoring in human development and family sciences and minoring in psychology.

Upon moving to a new school where she didn’t know anyone, Johnson turned to climbing as a path to make connections. Originally from Gresham, Ore. and Santa Cruz, Calif., Johnson was used to having climbing as a unique hobby. However, upon moving to Bend, Ore. she quickly realized that was no longer the case.

Bend is home to one of the largest big wall climbing destinations in the Pacific Northwest. That of course is the famous Smith Rock—if you are anywhere from Oregon or neighboring states, you may have heard of this incredible state park. This attraction has brought in some of the best professional climbers around the world and makes climbing one of the most popular hobbies in the area.

OSU-Cascades has a rock climbing club which is one of the largest clubs in all of OSU with 217 members. The club meets every Friday for a free climb in one of Bend’s local rock gyms with a consistent turnout of 50 to 60 people every week. In addition, they also have a smaller, more competitive climbing team with around 12 members. They hold three-hour practices three times a week and travel to compete in competitions around the Pacific Northwest.

The team has two hired coaches with a competitive season from September through the end of March. During this time, the team travels to around three bouldering competitions in the fall and three rope competitions in the spring through USA Climbing and the Northwest Collegiate Climbing Circuit. Climbers must compete in one of said competitions in order to qualify for regionals and potentially go on to divisionals or even nationals.

Before moving to Bend, Johnson was already consistently climbing about three times a week in her free time, so she wanted more than what the climbing club could offer.

“I was actually really hesitant to join the team at first,” Johnson said. “I thought everyone was going to be so much better than me, but once I joined I was really glad I did. Now some of the people on the team are my best friends here.”

Growing up homeschooled, Johnson was never a part of any team sports. This instilled in her a drive to challenge herself which is partially why she was drawn to climbing in the first place.

“I love how individual it is—we are all on our own path and I am very self-motivated to push myself to get better,” Johnson said.

However, being on a team has now allowed her to share in her victories and feel supported by a community.

“We really can raise each other up and push each other to get better,” Johnson said.

Nick Conroy, the captain of the rock climbing team and president of the climbing club, has been impressed with Johnson’s improvement over the course of the past year and her ability to bring fun to the team. In climbing there are different grades for different levels of climbs, V0 being the easiest and V11 being one of the hardest grades that gyms offer for bouldering.  On the team, the majority of the climbers are between V4 and V7 with only a few at V8 and V9.

Conroy explained how Johnson joined the team as a V3 climber and has now progressed to a V6 climber.

“She is now confident taking big falls and really committing to that next hold even though you feel like you might fall,” Conroy said.

The rock team holds practices at Bend Rock Gym, a state-of-the-art climbing gym near campus. Here they offer students on the team a significant membership discount.

“The gym is super nice compared to other places I have climbed and was a huge part of the reason I came here,” Johnson said.

Outside of the nine hours of practice every week, Johnson also finds time to climb for fun in her free time either at the climbing club, with friends after dinner or on the weekends to fun places around Bend. She has been to Smith Rock a few times, a place called Meadow Camp which is just 10 minutes away from campus, and some other smaller places around town.

“Although I feel a lot more safe indoors, I have more fun climbing outdoors because that is what climbing is really all about,” Johnson expressed.

Kelly Watkins, a second-year student majoring in ecological engineering at OSU in Corvallis, began rock climbing at the beginning of her freshman year in her Intro to Outdoor Adventure class through the Adventure Leadership Institute, and can provide some incite into what makes this sport so special, no matter the location. The class requires everyone to get belay certified because at the end of the class they go on a climbing trip to Smith rock where Watkins had her first introduction to climbing outdoors. Watkins was initially drawn to the social aspect of the sport, but after this first trip, she fell in love with the amazing places the sport can take you.

Despite being one of a few women in the sport, Johnson only sees this as extra motivation to work hard.

“This is my first time being in a sport that is male-dominated,” Johnson said. “I used to do ballet and theater, which is very much the opposite, but the team is so supportive—I don’t even really think about it. It is also a huge motivator; when I know that my competitors will be naturally stronger than me, it just pushes me to put more effort into my techniques and think creatively.”

The climbing community is inherently super friendly and supportive.

“You have to trust your life in your belay partner’s hands, so there is a bond formed between fellow climbers,” Watkins explains.

Conroy is dedicated to helping new climbers find their spark and is passionate about expanding the climbing program at OSU-Cascades. Since Cascades doesn’t have any official sports teams, Conroy sees how it could be a huge marketing tool for incoming students.

“It can be a great outlet for students to get involved and will hopefully be a core college memory for them,” Conroy said.

The team recruits new members at the beginning of every year. If you are interested, you can visit the OSU-Cascades climbing team’s website here or contact [email protected] for more information.