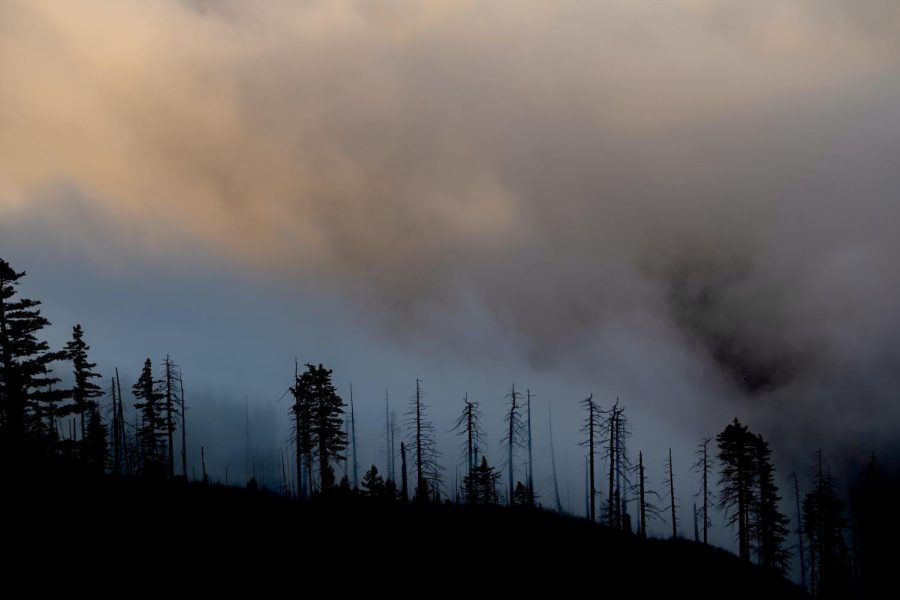 Smoke looms over a hillside of dead, burnt trees in Oregon.

Over the past few years, it’s no secret that the weather has been slowly, yet drastically changing around the world. As we go through the year, seasons happen naturally, but more recently, the seasons have been different, summer’s have been hitting record highs and winters have hit lows that hadn’t been seen in years. The cause of this is climate change, the long-term change in temperatures and weather patterns.

Here in Oregon, the 2021 winter was predicted to be colder and wetter than ever before, according to NOAA or the National Ocean and Atmospheric Administration. This consisted of temperatures reaching a high of mid 40s and some days not reaching higher than freezing, with around 15-20 more inches of rainfall than usual, a lot for a state that is known for its rainy weather. In February, there was even a freeze, which rarely happens here in Oregon. In some parts of the state that don’t always get snow, as much as four inches fell, which turned to dangerous ice, causing power outages for thousands, with trialing issues.

What does this mean for the residents of Oregon and for that matter, the rest of the U.S., who also had record low temperatures, even a freeze spell in west Texas? It can mean many things, from learning how to cope with colder winters, to dealing with the emotional toll that comes from the drastic changes.

The most noticeable difference in Oregon when it comes to winters, is the gloomy, gray skies, even if no rain is predicted. From around December to March, the wettest and coldest months here, sunshine is rarely seen, the skies consisting of partly cloudy or just cloudy. For many people, this gives a slow, sad feeling to their daily lives. This isn’t uncommon however, there’s actually a medical term for it, called SAD.

SAD, or Seasonal Affective Disorder, is by definition, a mood disorder characterized by depression that occurs at the same time every year. It is common in areas that get extended periods of time where there is little sunlight, such as winters and springs in the Pacific Northwest. The challenging thing about it, according to David Kerr, Ph.D., a professor at Oregon State University’s School of Physiological Sciences, is:

“Diagnosis is very challenging and it can be difficult to differentiate between seasonal and non-seasonal depression,” Kerr said. “Most of the time, people recognize the seasonal pattern themselves and tell a clinician about it. Together the individual and a clinician could rule out other explanations and confirm the diagnosis over time. Luckily, the treatments for SAD are the same as those for non-seasonal depression: namely, cognitive behavior therapy (CBT), antidepressants and full spectrum light therapy (yes, there’s evidence it helps with non-seasonal depression too), all of which can be used in combination.”

Notice what’s not on this list—vitamin D. According to Kerr, although vitamin D is necessary for our health in the long term, taking supplements hasn’t been shown to be an effective treatment for depression and shouldn’t be considered as heavily for treatment of SAD.

However, winters aren’t the only thing that can cause a shift in mental health. As climate change has begun to take over, states like Oregon that are usually cooler even in summer have begun to increase in temperatures—causing a lot of people climate anxiety.

Although it is often hard to imagine weather having so much control over our mental health, it isn’t rare. Both winter and summer months can cause stress and a wide range of other emotions. Although winter has historically been worse than summers in Oregon, that is slowly changing.

In 2021, Oregon had one of its biggest heat waves, something that was known as a heat dome. This past summer, Oregon hit record highs, jumping up as high as 116 degrees Fahrenheit in Portland, Ore. in June of 2021. This usually leads to one thing: residents getting anxious about the consequence of the heat, only to have just gotten over the risks of the cold.

This heat wave caused the third biggest blaze in Oregon. On July 6, two fires—the Bootleg and Log fires—combined to create the massive blaze after only 39 days. It finally contained, burning 400,000 total acres. Hundreds of people left their homes not knowing when, or what, they would come back to.

It also left the state in a drought, after getting less rain than usual, only to have higher temperatures to follow. For many, the concern of this lack of water, a resource needed on all levels to survive, whether it is staying cool or battling wildfire, also plagued the state. These fires and droughts are beginning to be a pattern that Oregon will see more and more of, a change that residents will have to prepare for due to climate change.

As temperatures go from low low’s to newfound highs, people have begun to become aware of these changes more frequently, and have become more concerned and anxious about what will happen the next season. Although individually it is impossible to end climate change, there are things that can be done to reduce your own ecological footprint and help reduce anxiety around the changes in our climate as a result of global warming.

There are, of course, things we individually can do to help reduce global warming and our effect on the environment. The biggest things, according to Citizens for Public Justice, are things like recycling and doing so properly, walking or taking the bus instead of driving and getting involved in your community’s local clean-ups and environmental education opportunities—just to name a few!

Seeking professional help to battle SAD or anxiety, learning about how to best prepare for the cold or learning how to resist the heat can also reduce climate anxiety if they know how to get prepared.